Life's too short for bad soup 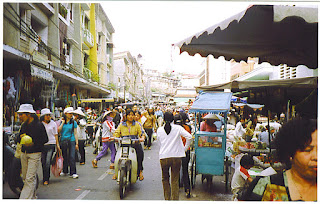 This really sums up the unseizing, bustling atmosphere of Vietnam, surrounded by people in Dalat market, with 'Motos' flying at you from out of no where.

Greetings from Dalat, a beautiful town in the Central Highlands of Vietnam. I arrived in what the southerners call Saigon, but what the northerners call Ho Chi Minh city. It's impossible to cross the roads... you'll have to wait to see a photo before you will believe this. if it's an emergency (say, you need to eat) then... so i read, you just walk. Apparently, you take a leap of faith (a lot like Indiana Jones at the end of The Last Crusade) and though the motorbikes won't stop or even slow down, if you move very slowly and steadily (no stopping... oh, you may want to stop and even close your eyes, but don't!), they will serve around you.

... So you spend most of your time jumping on the back of bikes so the locals can take you places... like up the block. most bikers (and cyclo-ists) are southerners who lost their right to officially work and live in Saigon (and any money they may have had) officially after reunification. my first night I stop at a modest looking cafe... very hungry... there weren't even menus... I wondered if they did food and not just tea. I asked 'noodal?' That's not Vietnamese, just an idiot looking for sustenance. They sit me down eagerly, give me coffee, nuts and a big rice cake. I'm munching away happily, trying not to buy too many postcards and novels from the persistant street vendors... when out of nowhere a man comes with a living lobster! He's nodding to me... i guess saying, 'you want me to kill this living creature and serve it for you!?'

I shake my head. I can see he doesn't get my meaning and he goes away happily. He goes to kill this lobster so I can eat it. I'm sitting there, feeling all eyes of the street on me. They come back with a plate of veggies and some white flesh... so I'll spare you all the psychology and how this thing was alive a few minutes earlier. the cooks are looking at me... and i eat. never has anything been so bitter in my mouth.

I looked at my (5yr old) lonely planet guide and followed it up the coast to Nui Me ("miles of secluded, untouched beaches where you'll need a tent to sleep in") and saw nothing but beach resorts built ontop of the actual beach so that the tide comes all the way up to the resorts and the tourists don't have to walk to get to the sea. How quickly time change.

I got a bike and rode to the fishing village nearby... it's strange that people become more surprised and happy to see you the further away from the tourist route (ie, where the lonely planet tells you to go). i got a round of applause from a whole street of locals sitting on their porches with their children when i fell off my bike. it was a very special moment... 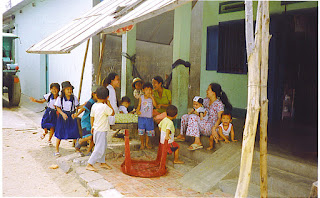 Dalat is a rare place in that is was hardly affected by the war - because up in the mountains, there is a retreat where the 'important people' would stay... on both sides... in surprisingly close proximity to each other! 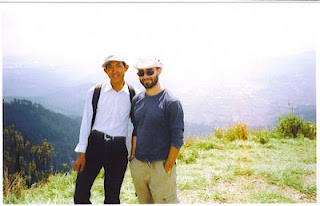 A top the mountains of Dalat with Kwai - which means 'fine'
Posted by Jasoni at Friday, January 20, 2006

Email ThisBlogThis!Share to TwitterShare to FacebookShare to Pinterest
Labels: Vietnam

So how's the complete vegetarianism going?