Today I'm in Hanoi, tomorrow I'm on a plane. In the last week I sailed out and saw the beauty of Halong Bay. 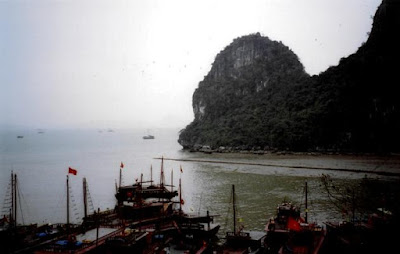 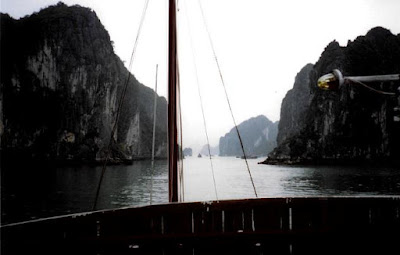 Also up North, near the Chinese border are mountain villages with amazing scenery, but where you sometimes can't see right in front of you because you're walking through clouds. The villages Cat Cat and Sin Chai were a highlight, where the people of the moutain tribes would stroke my beard, call me 'Fidel Castro' and invite me into there homes (4 wooden walls, a twig fire smoking at the centre, some plastic sheeting for a roof and... oh... a satellite dish - the whole family are watching Liverpool Chelsea, with their arms around each other).
It's such a simple way of life. No money exists in some of the communities. They plant rice, design and sew amazing, colourful clothes for their family and... that's about it. My friend Moi (of the Mom tribe) told me that it's up at 5 for breakfast (rice), start work at 6. lunch (rice) from 11 to 1. Work from 2 to 6, supper, then work to 11. 'Then you sleep?' I ask. 'No, then we can do what we like.'

Schools have just been built in some of these villages. School runs from 7am to 11am (ages 7 to 9), then it's back to work on the rice planting and clothes sewing. You'll be working full time by the age of 9.

Life there seemed hard to someone like me. I asked, is it a good life? are you happy? The answer was yes. I asked if there was anything they would like if they could wish for it. Moi thought about it and said No.

To think that the people of Vietnam had to cope with this poverty and not so long ago, the plague of Colonialism. Under French rule, the Hill Tribes were pushed off their land to make way for French plantations (literally further and further up the mountains). They were pushed into what would become a strategic position for the American War (what the Vietnam War is called here). An estimated 200,000 Hill tribe people were killed.

Decades later, this country is still recovering from a war which was waged on it's nature (eucalyptus trees have been planted where there was once luscious jungle teeming with wildlife, because they grow quickly, providing much needed wood) as well as it's people. I'll end with a quote from Vietnam's favourite poem, Kim Van Kieu (by Nguyn Du), from which all the people here know the opening lines by heart:

Rich in beauty, unlucky in life! Strange indeed, but little wonder, since casting hatred upon rosy cheeks is a habit of the Blue Sky.
Posted by Jasoni at Sunday, February 12, 2006

Email ThisBlogThis!Share to TwitterShare to FacebookShare to Pinterest
Labels: Vietnam

Its all amazing but I'm actually just letting you know that your new email address just sent what looks like a virus laden email. Is it your computer?

Sorry it's all come to an end - sounds like an amazing trip.