Bernauer Strasse is a microcosm of the horror of the GDR border system and the whole place is developing into a huge memorial to the days of the Berlin Wall. Events that took place in this small area include the 1963 Tunnel, which was the biggest mass escape across (or under) the Wall; and the escape of Hans Conrad Schuman, the border Guard who saw his chance, ran for it and jumped over what was then the Berlin Barbed Wire, becoming one of the most famous images of the Cold War. 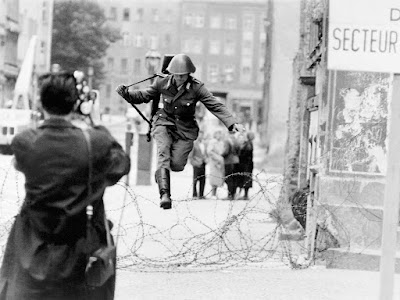 What gave this area its initial quirk is that it lay where Wedding (West Berlin, a French occupied district) met Mitte (East Berlin, Soviet occupied). The line between the West and East districts which would become the line of the Berlin Wall didn’t run conveniently along the main road but just off it, through blocks of apartments. After August 1961, some people sat in their East Berlin apartments but their flower pots were be in West Berlin, hence the picture of a man looking out his window which had been secured with barbed wire.

The morning the Berlin Wall appeared, the Berliner Post read: Berlin blocked at all border sectors. People’s army surround Berlin. People in these apartments read the headline, handed their belongings out windows and ran into the West. Most gruesome of all, after tenants were made to vacate their homes, people started to jump out of these windows to land in the West. A ten year old boy had the nerve to jump from a 5th floor window, damaging his spine. An eighty year old woman crawled slowly out of a window and soldiers on the East side got into the building to pull her back inside. Westerners, who had been encouraging people to jump, bringing sheets and mattresses, had climbed up the building to her storey to help her down. This turned into a literal tug of war between the East and West. One side had hold of her arms, the other her legs. The woman fell to her death. 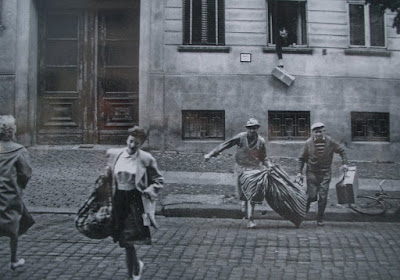 Two minutes from Nordbahnhoff are remains of the Berlin Wall. Grass has grown on the old death strip. The old floodlights and border guard walking paths remain. Behind the Eastern strip a grave yard stops very abruptly because the GDR dug up graves to put down their death strip.

These remains of the Wall are a shadow of what it used to be, full of holes and graffiti, with the reinforcing steel poking out, but part of it has been redeveloped by Kohlhof and Kohlhof into the Berlin Wall Memorial, dedicated to the division of the city, and victims of the wall and communist tyranny - to bring home what it had really been like, ten-foot high, lined with piping so a person could not grip the top to lift themselves over, a clear grey so the Border Guards could get a clear view of an escapee, the death strip was raked earth and sand so footprints of an escapee could be seen. The remains of an old alarm system stood which trip wires would have been attached to.


This Wall was the fourth manifestation, the first being many thousands of soldiers and barbed wire, the second was more of that, the third was piled, cemented bricks. On this very street, an escapee armoured a large version, put their foot on the accelerator and smashed through it. There is a large picture of builders re-building the Wall with guns poking them from behind. So the final wall was an impenetrable columned effort with death strip which went up in the early seventies and escape attempts plummeted.
The inner wall was an unimpressive fence giving one the impression the regime wanted to impress the West with an intimidating abomination, but saved on resources when building the part that Westerners couldn’t see.


Then after the Memorial is a strange looking church. The original pre-Wall church, which stood in the centre of this neighbourhood, which would be split in two, had the unbelievably ironic name: the Church of Reconciliation. Of course it stood were the GDR wanted to put their death strip, but after evicting people from homes and graves, they didn’t want the bad publicity from tearing down a church. In the 1980s when the two superpowers of the Cold War were starting to see eye to eye – everyone seeing this as an opportunity for world peace – the GDR saw this calmer period as an opportunity to finally blow up the Church which they did just a few years before the fall of the Wall.


After the Fall of the Wall, the church was rebuilt, but rather than making things look like nothing much had happened in the last century (like the recreation of Pariser Platz) a much more original idea was implemented. They took the earth of the old death strip, compressed it and moulded a new church where, on close inspection, you can see small fragments of the red bricks of the original. It was completed and dedicated on the millennium, another puzzle piece in place for a unifying country.
Posted by Jasoni at Tuesday, May 02, 2006