The Siegessäule (Victory Column) stands victoriously in the centre of Berlin's Tiergarten. Designed by Heinrich Strack after 1864 to commemorate the victory of Prussia in the Danish-Prussian war, by the time it was inaugurated on 2 September 1873 Prussia had also defeated Austria in the Austro-Prussian War and France in the Franco-Prussian War (1870/1871), giving the statue a new purpose. These later victories inspired the addition of the bronze sculpture of Victoria, 8 meters high. The column is featured in Wim Wenders' film Wings of Desire, a place where angels congregate. Below you'll see my good friend Jasmin riding past it. She's a little angel too. 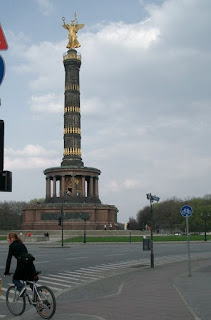 Originally the column was erected with a height of merely 50.66 meters opposite the Reichstag building. In preparation of executing the monumental plans to redesign Berlin into Welthauptstadt Germania, in 1939, the Nazis relocated the pillar to its present location. The relocation saved it. The monument survived World War II without much damage.
Welthauptstadt ("World Capital") Germania was the name Adolf Hitler gave to the projected renewal of the German capital Berlin, part of his vision for the future of Germany after the proposed victory in World War II. Albert Speer, "the first architect of the Third Reich", produced many of the plans for the rebuilt city, only a few of which were realized. The first step in these plans was the Olympic Stadium for the 1936 Summer Olympics, where the world cup final will be played. 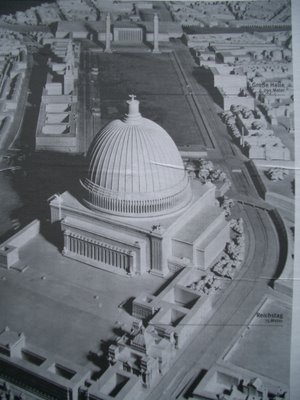 Other projects, such as the creation of a great city axis, which included broadening Unter den Linden and placing the Siegessäule in the center, far away from the Reichstag, succeeded. Others, however, such as the creation of the Große Halle (Great Dome), had to be shelved due to the beginning of war.. Robert Harris’ Fatherland (the great alternate history novel) posits that Hitler's and Speer's vision of rebuilt and monumental Berlin would have been realized by 1964. in the picture – you can see the Great Dome and below and to the right – the Reichstag (huge). Hitler wanted to build a city as big as his ego, the Great Dome would have been submerged in clouds most of the time.
Posted by Jasoni at Saturday, May 20, 2006

Email ThisBlogThis!Share to TwitterShare to FacebookShare to Pinterest
Labels: Berlin

Do you like auburn football ?
I think It is usefull, odds world cup 2006

Hi, it looks greate. but You should visit those links to know more
Do you like football gear ?
I think It is usefull, rugby world cup

Thank you, I like your information. please visit the links:
Do you like football gear ?
I think It is usefull, rugby world cup