'Bridge of Spies' was a snoozefest, and a trip to Potsdam

Spielberg's 'Bridge of Spies' was a fascinating bit of Cold War history retold by seasoned pedestrians. Not a moment's tension, and 141 minutes long! Though Tom Hanks is reassuringly wholesome as ever, nice to have a heart at the centre of the film, a hark back to the 80s when good guys were good and you could rely on them to come good at the end, and all's good that ends good.

It takes me back to a trip to Potsdam I took in 2006 when I saw, among other things, Glienicke bridge - 'The Bridge of Spies'. Blogpost retrieved from the archives and pasted below, join me on a trip down memory lane...


A short distance from Berlin, Friedrich the Great built a Palace fairground in Potsdam. He liked to be thought of as the Philosopher King, an artist and thinker first, and a King second. Also quite the Soldier King. When Roosevelt died in 1945, Hitler thought it would be the turning point for Nazi Germany from which they could go on to win the Second World War; determined to carry on the fight after being inspired by the biography of Friedrich, as here was a man who had succeeded in fighting a war on multiple fronts. 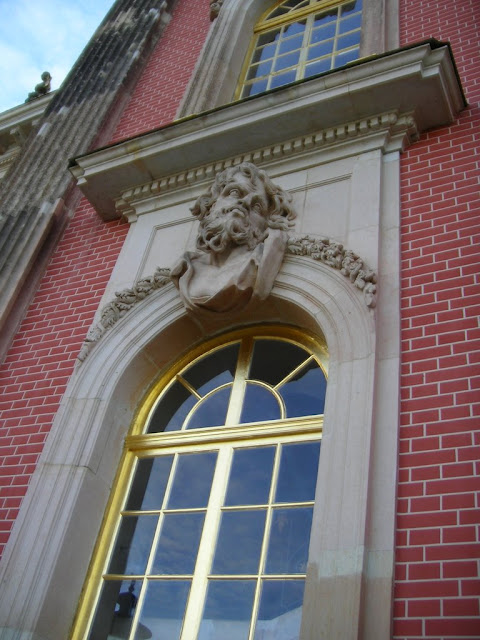 Friedrich wanted to build impressive palaces, but they cut a few corners. Notice the painted walls made to look like red bricks! 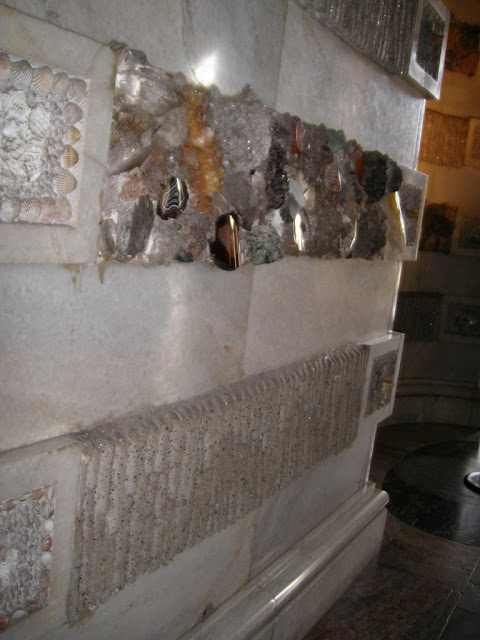 In the palaces there are walls made of precious stone, coral, fossilised wood; statues hanging from the ceiling. I only managed to take this one photo before one of the guards caught me (no photography allowed). Trust me to leave the flash on, alerting everyone on the room! 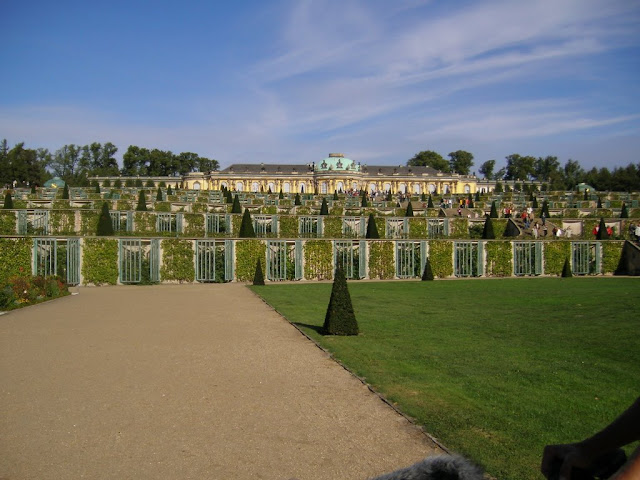 Friedrich's Sans, Soucci. , on top of dozens of mini greenhouses, which once boasted to be the most Northern place in the world where wine was produced. 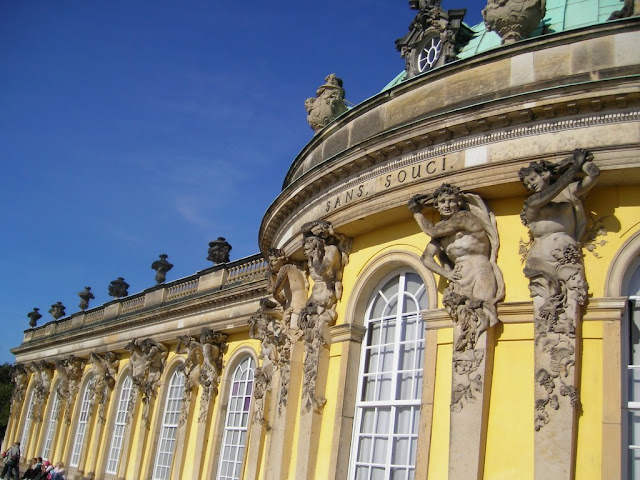 Adorning the building are the thirteen gods of wine, and notice the bizarre grammar of Sans, Soucci . There are books written about the comma and its meaning, but I'll never finish this blogpost if I go down that rabbit hole. 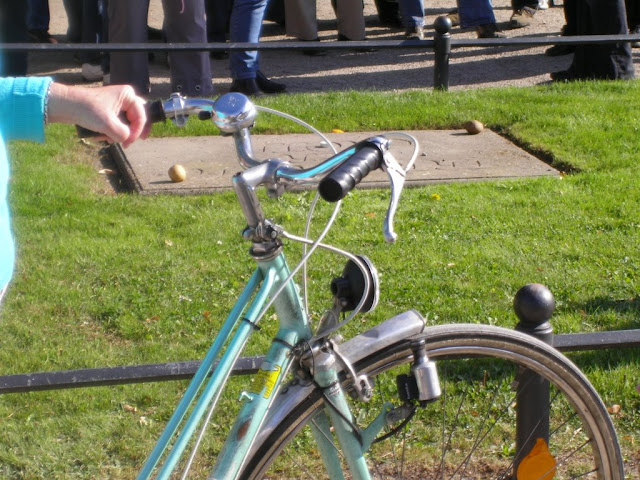 When Napoleon captured Berlin, he took his men to Friedrich's grave grave and told them to pay their respects, "We'd never have got this far, if he was still here' (so some tour guide told me). As you can see from the photograph, it's a simple grave, as he didn't like glorification, and he's buried alongside his beloved dogs, bless him. Notice the potatoes, signifying the importance of potatoes in Friedrich's reign (it's very useful for a country at war as it grows underground and is a crop that can't be destroyed by fire). 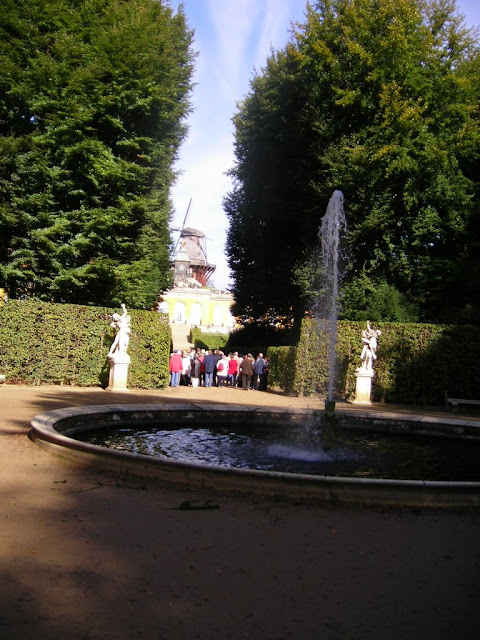 The noise from this nearby windmill upset Friedrich's flute playing. He told the farmer to stop it or he would shut it down. The farmer said it was his legal right and he'd take the case to court, which shut Friedrich up. In this enlightened society, Friedrich didn't want to be seen ignoring a law for his own satisfaction, and a farmer could very well get the better of the king. 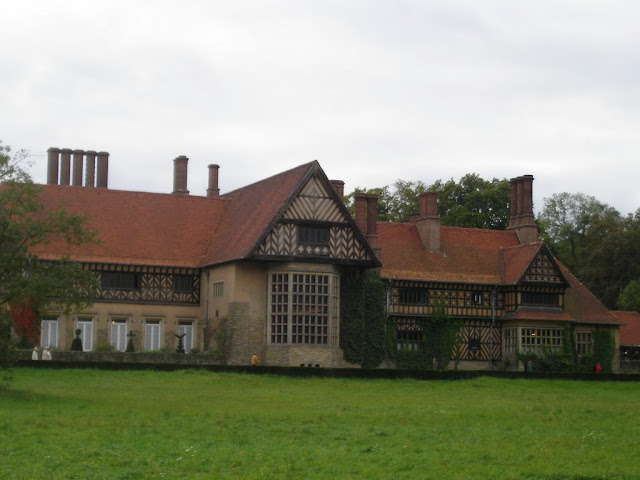 After a lot of gaudy Russian, Chinese and French inspired architecture, we passed a more homely sight. The English manor style Cecilienhof Palace was where the Potsdam conference took place, just a few days before the bombing of Hiroshima. Attlee, Truman and Stalin came together for talks, signifying the end of WW2, but unfortunately this was just the beginning of the Cold War. 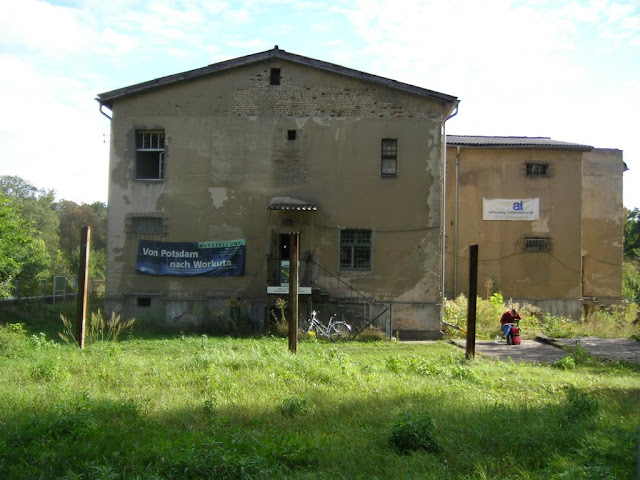 Potsdam was part of old GDR. Many impressive old houses became dilapidated, some are being patched up now. This very pretty street was completely cut off, used only by the top peeps of of the KGB. 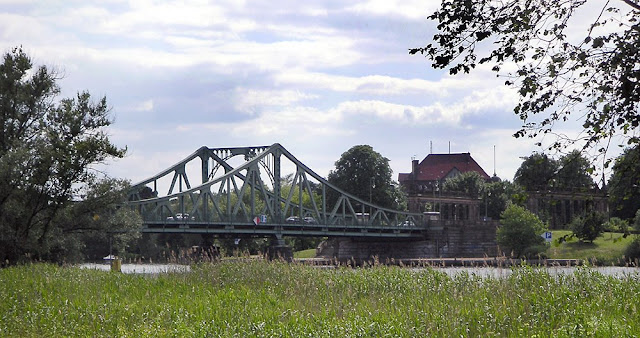 The Glienicke bridge spans the Havel River to connect the cities of Berlin and Potsdam. The ‘Bridge of Spies’ was used it three times by the Soviet Union and the United States to exchange captured spies during the Cold War. The first exchange took place in 1962. The U.S. released noted Russian spy Colonel Rudolf Ivanovich Abel in exchange for pilot Francis Gary Powers captured by the USSR following the U-2 Crisis of 1960. Gary Powers's capture in 1960 caused an international crisis. Initially, America tried to convince the Russians the U-2 had been a weather plane. However, the Russians then produced Mr Powers alive, claiming he had admitted spying for the CIA. Russian leader Nikita Khrushchev demanded an apology from President Eisenhower and when none was forthcoming plans for a superpower summit in Paris collapsed. In 1966 the exchanged prisoner was Michael Caine (playing Harry Palmer).