Now that the temperamental camera works again, I can do a post about my Strasse. I was very sad when I left my life in Schoeneberg; a couple of emotional hugs (for me), a nod to the neon sex shop across the street, Kiwi Mike helped me load up his car, shouted, ‘WAVE GOODBYE, BUDDY!’ and dropped me off at Sophienstrasse. A friend had told me that she had seen the apartment I currently preside in and objectively called it 'the worst apartment I have seen in Berlin, but only because Berlin has such good places to live. It would be a great apartment to live in in London.' Sometimes it helps to have the low standards of a Londoner. 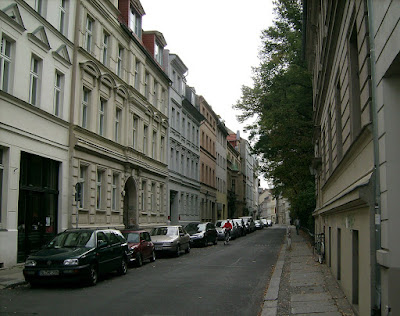 Living with the Prof has advantages, like a huge library of academic reading which - one day – I’ll take advantage of. Unfortunately he loves cooking with lemongrass. Whenever he cooks a dinner I have to say, ‘Sorry Prof, I just had a really big…’
‘But there’s no food in the fridge.’
‘…apple.’
‘An apple?’
‘Yeh, It was huge.’ 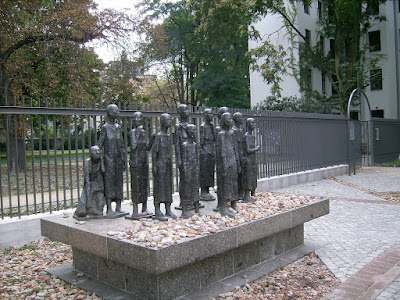 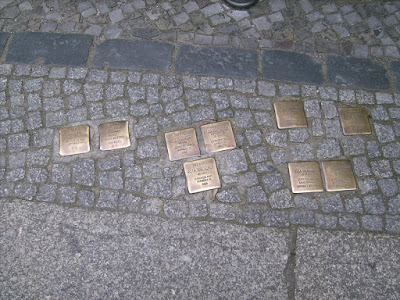 Small brass tiles are scattered around the pavement in memory of the lives, families and friendships that existed here before they were all annihilated. The 19th century houses were restored during the GDR as a tourist attraction. 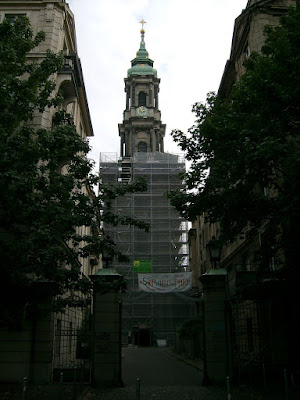 The baroque Sophienkirche, the only church in Mitte to survive WWII, whose bells are banging away as I write this actually. I don’t mean to be blasphemous but God wouldn’t want to wake me up on the hour every night I leave the window open to let me know what the bloody time it is. Stop the bells!

It’s a pretty nice community in the building. The other day, one neighbour, who’s studying film, took me to a preview of her classmate’s film about her divorce which was really sweet; a melancholy slice of her life, recording her thoughts and how she looked in a time that’ll never return. The cutest part was at the end, the credits said A FILM BY… and it showed her hyphened, married name, then the letters were deleted back to her maiden name. Another neighbour told me that we don’t have much time left here. The reason ordinary people like us can live in such a nice area is because it’s the last dingy building left, that’ll soon be knocked down to make room for nicer, more expensive apartments. 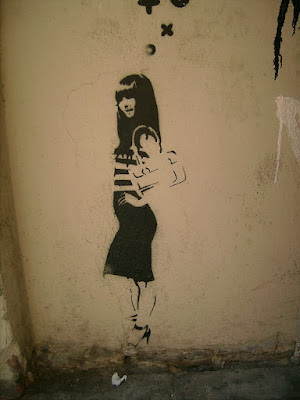 There’s a lot of graffiti by the ‘xoxo’ guy (here’s one on our front door people are always taking photos of, blocking the entrance). His inspiration seems to be a mix between Banksy and fashion magazines.
Posted by Jasoni at Sunday, September 14, 2008

Email ThisBlogThis!Share to TwitterShare to FacebookShare to Pinterest
Labels: Berlin

additional info regarding the entranceway:

there was a sign against the rats that read:

someone actually CORRECTED the misspelled "kein"...