Four of Akira Kurasawa’s siblings died in his youth. He left his home and father to live with his older brother Heigo, become a painter, get involved in labor-management struggles, write for a radical newspaper and do other things he later described as reckless.
Heigo was a benshi in Tokyo film theatres (narrating silent films for the audience, a uniquely Japanese addition to the theatre experience and a respected profession that died out due to the rise of talkies). After Heigo organized a benshi strike that failed, he committed a double suicide with his girlfriend. In his autobiography, Kurasawa mentioned the last time he saw Heigo, but there is no mention of the woman, which one biographer put down to his ambivalence towards women which can be seen in most of his films.
When Kurasawa was 13, he was led by Heigo through the devastation of the Great Kantō earthquake, being told, ‘if you turn away now you’ll always be scared.’ Kurasawa later said that this experience instructed him that to look at a frightening thing head-on is to defeat its ability to cause fear.

And so he looked death itself head-on: ‘I often think about my death and that is how Ikiru (Living) was born’ (me paraphrasing), a beautiful film exploring importance of the individual and self, finding meaning in life and government bureaucracy...

The public worry about bribes and 40,000 cars, but that’s just a fart compared to this massive, colossal waste of time 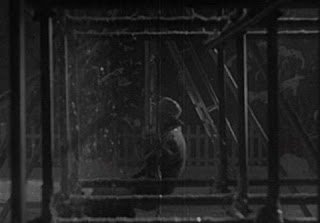 Takashi Shimura plays Watanabe, a civil servant who hasn’t taken a day off in thirty years, who lives by the idea that ‘You're not supposed to do anything here. Doing anything but nothing is radical’ but whose life is given a sudden shake by the diagnosis of stomach cancer. Kurasawa’s character talks of the blackness he fears, of how a terminal illness feels like drowning, of how he feels he never perceived life.

He meets a well-meaning artist who shows him a night of decadence, who tells him, ‘Men are such fools, only appreciating life when faced with death. It is your duty to have lust for life.’ (me paraphrasing again)

Watanabe finds meaning elsewhere and comes to terms with his situation by striving to cut through the bureaucracy in his job (‘There’s so much red tape there’s no time to think’) and achieve something tangible...