Raymond Chandler and The Simple Art of Murder

She hung up. I took the cork out of the bottle of Old Forrester and gave a sniff at it. I shuddered. That settled it. Any time I couldn’t smell whiskey without shuddering I was through.

After growing up with the colourful farces of Elmore Leonard and the comic-book sex and violence of James Ellroy, I wasn’t too impressed with the stark monochrome when I picked up my first Raymond Chandler; but later on, a little older, a little broken in, I bow to the hard-boiled daddy of crime fiction. 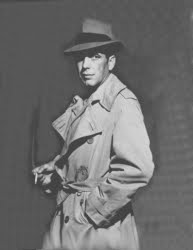 His famous detective, Marlowe (played in the movies most famously by Bogey), doesn't get the girl and often doesn’t get paid; a ‘student of classical chess games’, it's getting to the bottom of the mystery that drives him through each story – or maybe the staving off of loneliness. Loneliness, depression and alcoholism played a big part in Chandler’s life, which played out like so many of those sad, pulp stories from the 40s. His essay The Simple Art of Murder is the standard reference work in the field of pulp fiction.