Devilish Scenes of November (2017) is a darkly comic tale about a place where people spend their lives drunk, listless and traumatised by love. Harry loses himself in drink, Dick in literature, Andy in drugs, Val in her cooking, Maisie in her work, Bryan in his poetry. Tim only wants a warm seat by a radiator.

When Jeremy is drawn into this place by a mysterious power, his life and sanity soon too unravel.
That’s what happens when the devil himself chooses to spend his time in a single place for too long. 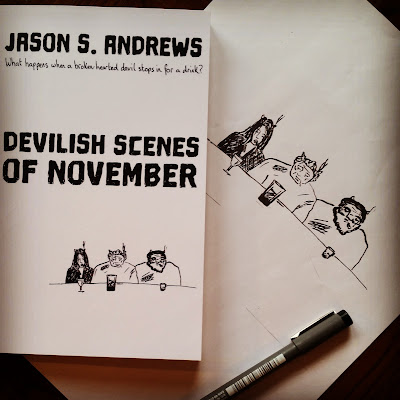 A little background
I originally wrote this story a few years ago and just recently gave it a nice polish. I was sitting in a gloomy but cool, atmospheric bar when the idea came to me. Everyone was drinking crisp lager, enjoying their cigarettes (because why else would they smoke them?) and talking to friends (I guess they were friends, because why else would they be sitting with each other?)

But everyone looked so DEPRESSED.

At the time, I knew a few people who were going through difficult break-ups, the friend I was talking to, the friend I was living with, the woman who lived next door, the guy who bought my TV... A vision came to me, a land of broken-hearts.

I was also reading The Master and Margarita and Goethe's Faust for the first time, so a little magic worked its way in there too.

It's exclusive to Amazon for a while, available in print and kindle eBook. Below are links to Amazon US and UK. For other countries, search the title!