An Evening in the Palace of Reason

It’s a few years ago now that I used to live with The Prof. One book that used to stare at me from his strained bookshelves was: Evening in the of : Bach Meets the Great in the Age of Enlightenment by James Gaines 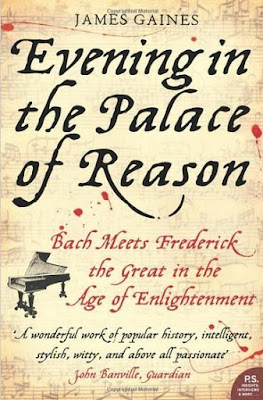 And just recently, thanks to my local library :) I finally read it (then my bag got nicked and I had to re-buy it for them, anyway...). This book is wonderful and I’d recommend it to anyone, music and history novices like myself included.

The premise is: one evening in 1747, the King of Prussia, Friedrich the Great invited 'Old Bach' to the Sanssouci in Potsdam, where he gave him a near impossible musical challenge in what seemed to be a sport in humiliating an old fashioned, out of favour has-been. Bach needed almost mathematical musicality to improvise the task successfully. Friedrich (the GLORIOUS hero philosopher King, as we learned to talk about him as Tour Guides) then asked of Bach for a piece even more complex, and Bach conceded that he’d have to get back to him. He went away and succeeded in writing 'A Musical Offering'.

Gaines spins the tale masterfully, narrating the lives of the two very different lives up to the night where the 'Philosopher King' (as he liked to be known), proud member of the Enlightenment movement, summoned a pious composer who believed music should be an expression of the love of God.

Friedrich’s life was stranger than fiction. As a child he loved the French language, poetry and the flute. His tyrannical father beat him if he found him indulging in such activities. Friedrich tried to escape his father's beatings and public humiliations; and when he was caught, he was imprisoned and forced to watch the execution of his friend and escape-accomplice. Friedrich was ‘born in captivity’, but he ostensibly became determined to please his father after this incident, pleasing his father into reaffirming his position as heir to the throne. Then he was a victorious Soldier King on the battlefield, then he built a cultural centre in Berlin for musicians, philosophers and the like; then he claimed his miraculous victory in the Seven Years War was entirely cheerless and he lost interest in music entirely. An elusive character! He was a controversial figure after his death and the next king, his nephew, built an obelisk for the soldiers who served him so well, (commenting) ‘about whom his fucking memoirs say nothing.’

The Cello Suites, because they're awesome

Though Gaines says he was disappointed at what a ‘crab’ he discovered Bach was, Bach cuts a sympathetic figure, outliving a huge number of his children; and a romantic one too, without an education – he defied aesthetic theory and trends of the time, his music complex to the point of algebraic, challenging himself until his last day with musical experimentation.

When it came to music, Bach would deconstruct, throw different styles and cultures together, 'along with the kitchen sink'. Bach’s genius is summed up in one of Gaines’ final lines:(paraphrasing)

‘In his last decade, he was pursuing more plainly than ever before, his ultimate goal for music, a demonstration of identity in variety that would embody insight into the depths of the wisdom of the world.'

Email ThisBlogThis!Share to TwitterShare to FacebookShare to Pinterest
Labels: A Musical Offering, Bach, books, Evening in the Palace of Reason, Friedrich the Great, James Gaines, Music