Rosencrantz And Guildenstern Are Dead

Read this brilliant play by Tom Stoppard a few years ago, about two minor characters in Hamlet, the story follows their exploits while Shakespeare's tragedy plays out in the background. Been looking out for this film version with two of England's most heroic actors for some time, and it suddenly popped up on youtube! You sense the influence of Waiting for Godot, as the dialogue flows from existentialism to nonsense, to existentialist nonsense, and they tend to mix up who's who, does it really matter? 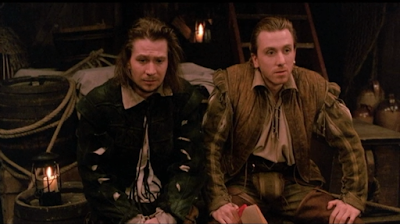 - Do you think Death could possibly be a boat?
- No, no, no... Death is not. Death isn't. Take my meaning? Death is the ultimate negative. Not-being. You can't not be on a boat.
- I've frequently not been on boats.

Thank you've been looking for this for ages and couldn't remember what it was called, and now I've found it with the handy link good work