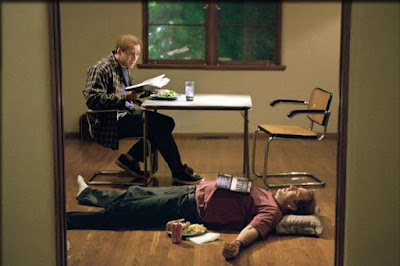 Saw Adaptation last night for the first time in years. I felt a strange sensation - I felt… proud that this is one of my favourite films. So good. Combining Susan Orlean’s wistful narration from her novel, The Orchid Thief:
There are too many ideas and things and people. Too many directions to go. I was starting to believe the reason it matters to care passionately about something, is that it whittles the world down to a more manageable size.
… the fictional Kaufman’s musings on existence, baldness and writing:
To begin… To begin… How to start? I’m hungry. I should get coffee. Coffee would help me think. Maybe I should write something first, then reward myself with coffee. Coffee and a muffin. Okay, so I need to establish the themes. Maybe a banana-nut. That’s a good muffin.
…and ideas about fiction, films and adaptations, at the end the film idiosyncratically serves up a dollop of sex, drugs, violence, chases and popsong, which is probably how Charlie's brother, Donald, would end it. Isn't that what most film viewers want to see? On the other hand, Charlie asks for Donald's help because he doesn't know how to end it himself, I guess sometimes you just have to settle on any kind of ending because trying to complete some perfect piece of art that you want to be a microcosm on the universe will only drive you mad.
There are so many links and layers, each theme is like a tiny atom desperate to connect with something else. And it’s just fun - confusingly playing with fiction and reality…
(Below be spoilers)
‘The Orchid Thief’ is actually a best-selling book by Susan Orlean (who is made into a fictional character, becoming Laroche’s lover and partner in a drug production operation), the film is actually based on writer Charlie Kaufman’s struggle to adapt it; and fictional sibling Donald Kaufman was nominated for an Academy Award with Charlie Kaufman…
Brilliant.
Posted by Jasoni at Wednesday, August 03, 2011