I picked up my first Bernie Rhodenbarr mystery a few years ago. Browsing the crime section I came across these great eye-catching covers. 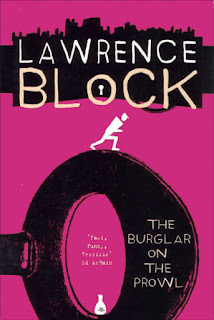 Bernie Rhodenbarr is an antiquarian bookseller/ gentleman-burglar who usually trips over a dead body and becomes the centre of a well written, twisty-mystery. What makes them fun and a little tongue in cheek is that Bernie himself is a fan of books and the crime genre, and the stories often involve uncovering rare editions of Raymond Chandler, the realisation of the rising value of early Sue Grafton, and what would happen next in an Agatha Christie.

By luck the first one I read was The Burglar Who Traded Ted Williams which paints Bernie in a more sympathetic light, he’s a reformed Burglar in this one who’s drawn back to the criminal life because it’s hard deal with the financial strain of running a bookshop these days and… he’s addicted to burglary. It paints this gentleman-burglar in a sympathetic light, and eased me into the series, otherwise I might not have got hooked on Bernie's adventures. ...Unless I'd have picked up The Burglar Who Thought He Was Bogart, because it’s my pick of the bunch. 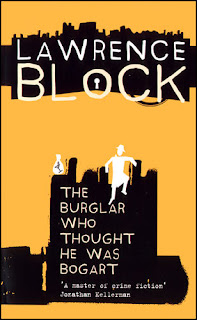 There was one film adaptation. The gentleman burglar was played by Whoopi Goldberg in a whacky 80s comedy caper. Block was unimpressed and developed the series by adding an extra layer of literary/ cultural research – The Burglar Who Painted Like Mondrian, The Burglar Who Liked To Quote Kipling, The Burglar In The … Block does his research and creates clever histories surrounding well known subjects which makes you question what you thought you knew. 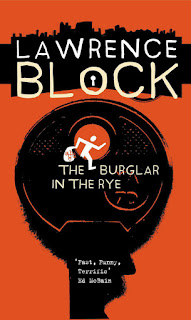 Back to the crime section then.
Posted by Jasoni at Tuesday, January 21, 2014