All my life I've loved the noir genre. I saw Jack Nicholson in The Two Jakes when I was 10 years old and had no idea what was happening. It was the greatest thing I'd ever seen, the style, the delivery of darkly poetic lines, the way a dame emerges from the night and you know she's trouble... I went on to spend my adolescent years on a diet of James Ellroy novels and all the classic old films. One of my earliest enjoyments of the (neo) noir style was the brilliantly cool late night action drama Midnight Caller. 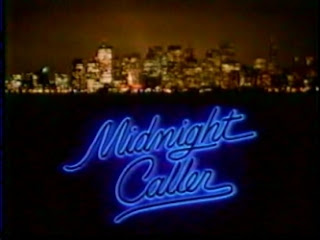 Here was an ex-cop late night talk-radio DJ in Frisco who got involved in the lives and dramas of the people who called in, and murder, mystery and romance was often on the cards for Jack Killian – 'The Night Hawk', played by the charismatic Gary Cole. At the end of each episode, Jack would talk into the microphone, cigarette in hand, about the events that had unfolded and what he had learned, and then say the immortal words, 'Goodnight , wherever you are.' What more could a 10 year old ask for? It was dark, moody; everyone had great hair, and the jazzy soundtrack was perfect.


Then it disappeared for 20 years. I was always looking around, but no DVD release, no repeats on television, no Midnight Caller. All I could do was yearningly whistle its theme tune; there wasn’t much else to do in the suburbs of Harrow.

But I recently found downloads on the internet. It's great nostalgia. Ok, it's dated, but some of it is still very good. It's a strange mix of styles – there's great over the top noir drama, fun action episodes, heavy handed social commentary, and some well delivered tragic drama.

A couple of choice lines, theme tune, and an ending monologue