Sitting in the Jardin du Luxembourg

Sitting in the Jardin du , the sun was shining in April, French words spilled from the mouths of pretty dark-haired women like distant music. Hemingway called these gardens a ‘great green jewel on the breast’ of Odeonia, his favourite neighbourhood. He enjoyed walking along its paths and under its trees as Somerset Maugham had done not many years before, and I was happy to walk in their footsteps. 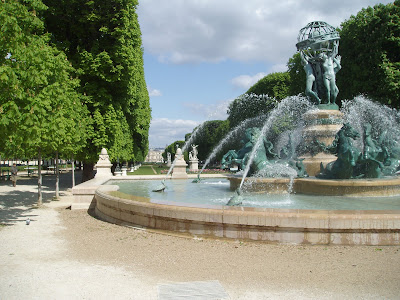 And I read about Hemingway’s time in Paris. A fascinating character, he indiscriminately attacked nearly everyone he knew in his fiction including those he was friendly with and those who had helped him. ‘He could not forgive you if you’d done him a good turn,’ someone on the Paris scene said. During WW2, he returned to Paris with his jeeps to liberate his favourite neighbourhood. He visited his favourite haven and shrine, Silvia Beach’s bookshop (the original Shakespeare and Company), and asked for a cake of soap. He asked Beach if there was anything he could do for her, she asked him to get rid of the German snipers on her roof. He went upstairs with his men, gunshots were heard, and then he left.

Hemingway said of the bookshop: 'On a cold windswept street, this was a warm, cheerful place with a big stove in winter, tables and shelves of books, new books in the window, and photographs on the wall of famous writers both dead and living… and even the dead writers looks as though they had really been alive.'

Shakespeare and Company
Hemingway first visited the bookshop during his first week in  Beach lent him his first books before he could pay a deposit, and he would borrow hundreds of books, the likes of Tolstoy, Stendhal and Flaubert. He would meet many of his contemporary writer-friends here including Pound and Joyce. Beach also lent him money so he could return to for the birth of his first child.

Sylvia Beach opened her bookshop in 1919. She became instant friends with Hemingway when they met in 1921. She published Joyce's Ulysses in 1922, 'a most goddam wonderful book' Hemingway exclaimed, he sold subscriptions, petitioned against its piracy and helped smugge the book into the .

Perhaps the most amazing thing about Beach is that she never quarrelled with Hemingway.