I wanted to read about Louis Armstrong, intrigued by that inherent smile, that gregarious soul, the joy he exuded, and was very happy to discover that the great man loved to write. 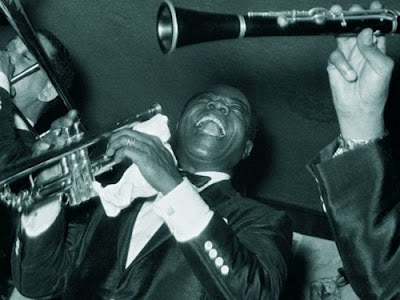 Satchmo wrote constantly on the road, sharing favourite themes of his life with correspondents around the world. He avidly typed, recording instant takes on music, sex, food, childhood memories, his "medicinal" marijuana use—and even his bowel movements, which he gleefully described… he loved a purge!

…he would extol the virtues of laxatives to anyone who would listen and even passed out packets to people he encountered, including the British Royals (he also appeared in humorous, albeit risqué, cards that he had printed to send out to friends; the cards bore a picture of him sitting on a toilet—as viewed through a keyhole—with the slogan "Satch says, 'Leave it all behind ya!'"

A letter extracted from Louis Armstrong, In His Own Words: Selected Writings here (In 1967, jazz legend Louis Armstrong wrote this generous, heartfelt letter to a fan stationed in Vietnam, had recently sent him some fan-mail. You wouldn't think they were strangers, as Armstrong's favourite laxative, "Swiss Kriss," is mentioned in the first paragraph (and in closing); he then goes on to reminisce about his childhood and the music he was exposed to; later on his wife, who had recently had a tumour removed, is discussed humorously and affectionately. He even ends with a song.)

Email ThisBlogThis!Share to TwitterShare to FacebookShare to Pinterest
Labels: books, In His Own Words: Selected Writings, Louis Armstrong, Music, Satchmo