Escaped to Cambridge as last weekend was a rare sunny one. A short, scenic walk from the town centre is Grantchester Meadows (like the Pink Floyd song!) and its famous orchard. Planted in 1868, the orchard became a Tea Garden by chance - a group of students asked Mrs Stevenson of Orchard House if she would serve them tea beneath the blossoming fruit trees, and it hasn't changed much since. Famous names who've had tea under the fruit trees include George Blake, Klaus Fuchs and the good old Cambridge spies. 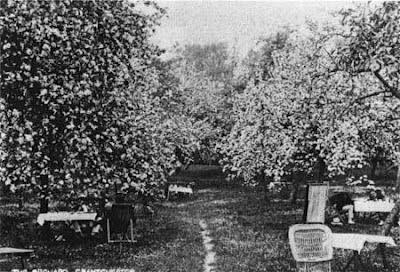 To supplement their income, the Stevensons took in lodgers and in 1909, a young graduate, Rupert Brooke took up residence. Brooke was hoping to escape his hectic social life in Cambridge and loved the idyllic life in Grantchester, but he drew a constant stream of visitors, a circle Virginia Woolf later dubbed the Neo-Pagans. In March 1915, Brooke embarked on a troop-ship bound for Gallipoli, never to return. He became posthumously famous, a symbol of the innocence of youth.