The Night Circus, and other stories

I was going to call this blog post ‘3 great women writers’ as I didn’t know how else to link recent reading. But I decided not to be lame. 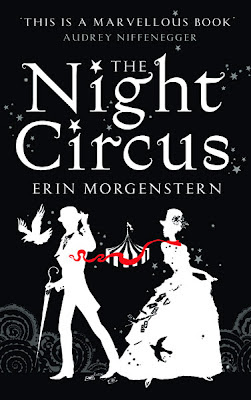 Instead I’ve gone with the title of Erin Morgenstern’s brilliant debut novel. There’s been quite a bit of hype about this book, and I couldn’t resist it as it started as a nanowrimo novel (explanation here for people who don’t understand that sentence). I was surprised to see on Goodreads quite a few negative reviews, this is the best piece of fantasy I’ve read since Neil Gaimon’s Stardust. I hate to put it in a genre, I’m not a fan of fantasy, and this story starts in the world we know, it gradually becomes more magical, there’s great writing and great imagination, the story and cast of characters gradually expand and the tension builds masterfully.

Another discovery I’m happy to have made is Sylvia Townsend Warner and her short story The Children’s Grandmother. She’s from , like me! It’s nice to know has a claim to fame other than being the location of the first fatal car accident (there is a plaque on this location and, in my youth, big pictures of it hung on the walls of one of the local pubs).

The Children’s Grandmother was published in The New Yorker, and can be heard on their site (or on itunes) as part of The New Yorker’s audio section, where authors choose from the magazine’s archive a story to read and discuss. Colm Tóibín, who reads the story, says that Townsend Warner has been forgotten of late and deserves rediscovery. Great story, fascinating character, I’m looking forward to learning more.

Less obscure, I recently read Daphne Du Maurier for the first time. This happened because I was looking into watching some old classic films and decided on the 1973 chiller Don’t Look Now starring Julie Christie and Donald Sutherland. I started and found the typical 'creepy 70s film' formula tiresome - the uncomfortable silences, the irritating music and close ups of ugly faces (oh my god! A person who’s slightly ugly! Noooo!).

I discovered it was based on a Du Maurier short story and decided I would rather read that. And it was great.

From wiki-P: It was in her short stories that she was able to give free rein to the harrowing and terrifying side of her imagination; "The Birds", "Don't Look Now", "The Apple Tree" and "The Blue Lenses" are exquisitely crafted tales of terror that shocked and surprised her audience in equal measure. As her biographer Margaret Forster wrote: 'She satisfied all the questionable criteria of popular fiction, and yet satisfied too the exacting requirements of "real literature".' Her stories read like classic tales of terror and suspense but written with a sure touch for character, imagery and suggestive meaning. They are a borderline case of where pop becomes art.

A more recent discovery of a collection of du Maurier's forgotten short stories, written when the author was 21, provides an intriguing insight into the writer she was to become. One of them, "The Doll", is a suspense-driven gothic tale about a young woman's obsession with a mechanical male sex doll; it has been deemed by du Maurier's son Kits Browning as being "quite ahead of its time".

I also found her story The Birds more chilling than Hitchcock’s classic interpretation, as the film kowtow’s to formula, introducing two handsome leads and a romance. The original story focuses on a farmer’s efforts to keep his family safe, and there’s a much darker ending.

I was always put off reading Du Maurier because of the twee TV adaptations of her most famous book, Rebecca, that have been shown through the years. Once again, the book has a lot more to offer.

Interesting family trivia, Du Maurier was the cousin of the Llewelyn Davies boys, who served as J.M. Barrie's inspiration for Peter Pan and the lost boys (old blogpost on that tragic story here) and her grandfather was the author and Punch cartoonist George du Maurier, who created the character Svengali in the novel Trilby. 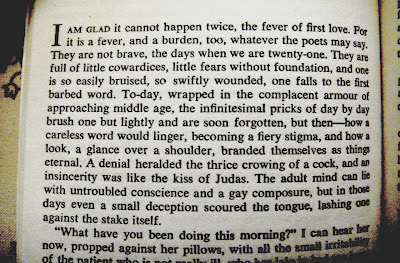 I am glad it cannot happen twice, the fever of first love. For it is a fever, and a burden, too, whatever the poets may say. - Daphne Du Maurier, Rebecca
Posted by Jasoni at Thursday, August 02, 2012