Learning a lot about the business side of the writing world at the moment - marketing, what’s commercial, how to sell your work… I've always found it hard to marry this side of things with the creative. When you’re forced to think about the former, the latter can become a confusing convoluted process.

Fortunately I've been inspired by watching many art documentaries on youtube, especially those nineteenth century Frenchies and their artistic endeavour.
Paul Cézanne is an interesting character. Angry, frustrated, disagreeable, he received a small allowance from his disapproving father so he wasn’t exactly painting for his bread. But he was a failure in the Parisian art world, ridiculed into leaving, and this hurt him deeply.


He had a wife and child. They lived in Paris, and he in . He had ostensibly little affection for them. His passion was for the landscape and for painting. And when his father died and he became financially independent, he lived wholly for them, pursuing his vision and form of expression, and honing his craft. When he was ill and nearing the end of his life, he contentedly painted the everyday. 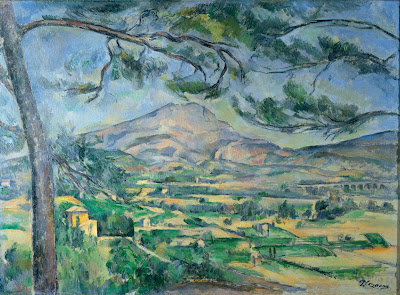 After his death, he is hailed as a genius, ‘forming the bridge between late 19th-century Impressionism and the early 20th century's new line of artistic enquiry, Cubism, inspiring a generation of artists including Matisse and Picasso.

With notoriety comes dollar value, and with dollar value comes notoriety. It’s strange and fascinating that in 2011 The Card Players became the most expensive painting ever, sold for a price estimated between $250 million and $300 million.

Édouard Manet, a man of contradictions, was distressed and sometimes discouraged by the hostility shown towards his work in his day. He always hoped for official recognition, aiming to be included in The Paris Salon – but he refused to modify his style for the sake of success, and his art bewildered his generation. His early masterworks, The Luncheon on the Grass (Le déjeuner sur l'herbe) and , engendered great controversy but served as rallying points for the young painters who would create Impressionism. 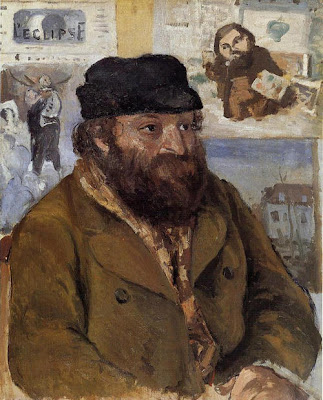 ortrait of Cézanne 1874
Camille Pissarro was a genteel character who rallied the impressionists when they were achieving little respect or success, and was a mentor to Cezanne. He came to with Claude Monet to avoid the Franco-Prussian war. After a while, in desperation, he went back to . ‘Here there is no art. Everything is a matter of business. It is only abroad that one appreciates how beautiful, great and hospitable is.’ In his forties, success still eluded him. He had a family to support. His wife was saying he should give up the dream, but he stayed true to his instinct, that he and the group of artists around him were doing something important.

Manet’s portrait of Émile Zola, who defended Manet’s work against its many controversies, and published the first serious study of his work. Zola was childhood friends with Cezanne, and Zola strongly encouraged Cezanne to follow his artistic endeavour. Cézanne broke off the friendship after the latter used him as the basis for the tragic fictitious artist in his novel His Masterpiece (L'Œuvre).


I realise the processes of making a painting and writing a novel are so similar. I have a lot of trouble splashing down a well written chapter on an empty page. It starts with sketches, then going to your canvas, putting down layers, painting over things, adding things, and never being really satisfied.