In 1958, encouraged to take pictures of the Newport Jazz festival, fashion photographer Bert Stern decided to leave his Nikon at home and take a video recorder instead. He filmed Jazz on a Summer’s Day, a classic music documentary, capturing stylish images of the audience and of course performances from some of the greatest jazz players such as Thelonious Monk and Louis Armstrong.

Like many others, it's through this film that I discovered mercurial jazz singer, Anita O'Day. Starting out in showbiz as a marathon dancer, she stayed the course despite a 14 year heroin addiction. Her autobiography, High Times, Hard Times (officially one of my favourite reads ever) is testimony to a crazy life of ups and downs, and a great insight to the jazz era in America.

Focused solely on and happy to be making music, she never saved any money for the future, unconcerned with who dealt with the finances and living off whatever she saw in front of her. She said the only thing people handed her were drugs and booze; if someone would have handed her a sandwich from time to time, she said, at least she would have eaten properly. She thought that as long as she had her voice, she could perform and continue to survive, so there’s a sad moment when the 60s come and rock takes over the national consciousness, ‘When I turned on the radio, I didn’t even hear my kind of music anymore.’ 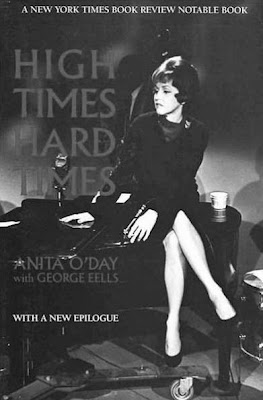 So highly recommended, Jazz on a Summer’s Day, High Times Hard Times, and the entire back catalogue of Anita O'Day songs.