Armistead Maupin's Tales of the City


Wondering what to get your loved ones this Christmas? How about something by Armistead Maupin? (this is one of those rare occasions I'd recommend the book or the DVD!) I remember the TV mini series of his serial novels Tales of the City, from the 90s, with Laura Linney and Dukakis. (Very controversial on its release - this from the DVD cover... ) The outrage it provoked when it aired in 1994 seems almost quaint these days. Apoplectic over the sight of two men smooching in a convertible, and the pot smoke watfing through 28 Barbary Lane, lawmakers passed resolutions fiercely condemning the series. In Tennessee there was even a bomb threat that emptied the local PBS affiliate the first night the show aired. Reverend D Wildmon sent members of Congress a 12 minute bootleg videotape featuring what he regarded as the dirty bits. I do want to thank him for the noise he made for without it, and the subsequent lurid reportage, my life's work might never have attracted such a widespread audience (A.M.) 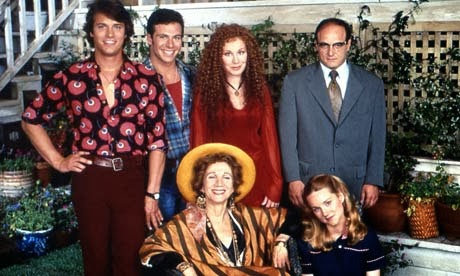 Only the first series is really very good, great cast, great atmosphere of 70s Frisco, and lots of surprises. The following two peter out. As for the books, they're consistently addictively readable, entertaining and engaging...

The series goes in surprising directions, the first two read like feel good adventures set around the exuberant gay scene in San Fran. In Babycakes, Maupin was one of the first writers to address the subject of AIDS. The characters go to some dark places, and the fifth book, Sure of You was written as the end to the series and really is the antithesis of the first book.

After a long hiatus, the series has continued, and it’s been a lot of fun (especially as I’ve had a lot of dental work lately and spent a huge amount of time under a blanket sipping soup through a straw)…

...and they are all brilliant.

It turns out 'The Days of Anna Madrigal' will be the last 'Tales' novel. Hope that's not true, especially as Maupin's been introducing a batch of newer generational characters)

The first portions of the series were published initially as a newspaper serial starting in 1974. Because installments were published so soon after Maupin wrote them, he was able to incorporate many current events into the plots, which are very interesting to read as the books span such a long period. Of the autobiographical nature of the characters, Maupin says ‘I’ve always been all of the characters in one way or another.’ The interesting interview above says more, as well as Maupin talking about his craft.