A big fan of the crime noir genre, here’s a blogpost on one of the Grand Masters, Lawrence Block. This is a rewrite of an old blogpost, for reasons I’ll explain shortly.

I’ve previously read Block's lighter Bernie Rhodenbarr series, numerous times, and am currently reading my way through the darker Matt Scudder series. They start in the 70s, and Scudder has matured his way through almost twenty books to the present day.

Matt Scudder is an alcoholic ex-cop turned private investigator haunted by an awful trauma from his past. Yes, sounds like a B-movie but Block rides the cliché and does what every Grand Master must do, write the same old crime story, but differently. The appeal is in the writing, in the character, in the atmosphere.

That’s why the film adaptation of the fifth Scudder book, Eight Million Ways to Die (1986) was awful, despite amazing credits (including Jeff Bridges in the starring role). When you simply take the plot, and throw a grizzled detective into the thick of it, you lose what makes the Matt Scudder stories. I’m sure it would have been better served in the golden age of noir movies. Recently they’ve adapted A Walk Among the Tombstones starring Liam Neeson, and I have no interest in seeing it. (A reason I rewrote this blogpost is that I originally talked so much about the movies, now I don’t see why they need mentioning at all. Block is a writer of novels, after all). 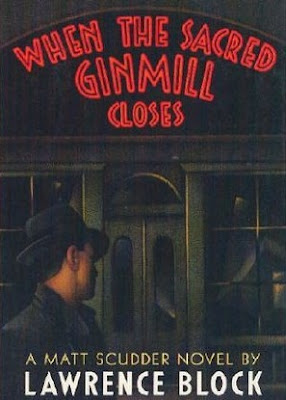 Scudder’s first story, The Sins of the Fathers (1976) is a flawlessly written mystery and a solid introduction to the character. The following four books run along to a similar formula.

The style and character develop from the sixth novel onward. In fact, the sixth novel, When the Sacred Ginmill Closes, really makes an impression. First of all, what a title (deriving from a line in the Dave Van Ronk song, Last Call), and the night-crawler atmosphere and dead-beat characterisation are spot on. Block’s protagonist, his only acquaintances other barflies, shuffles morosely through the mystery weighed down by regret and his dependence on booze. The following novel, Out on the Cutting Edge (1989), also struck me as an excellent stand alone crime noir.