I’ve been binge-reading the crime stories of Kinky Friedman, a country singer and former member of the Texas Jewboys who writes himself into his own Raymond Chandler meets Willie Nelson-esque murder mysteries.

The plots might be too non-existent for some but they're pulled along by an insane concentration of one liners as Kinky rides the cliché of detective talk. These wise cracks really hold up considering the series begins back in the eighties. There’s an addictive neon-lit, old-school New York atmosphere; you’re mostly hanging out with the singing detective and his cat in his warehouse apartment as he downs shots of whiskey and chain smokes cigars.

You can start the series anywhere. The ones that sum the series up nicely for me are: 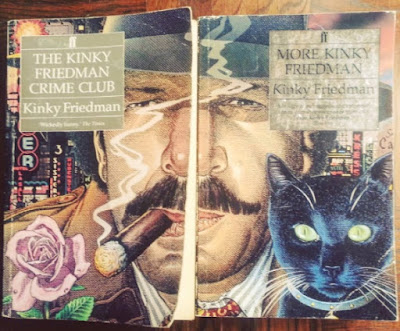